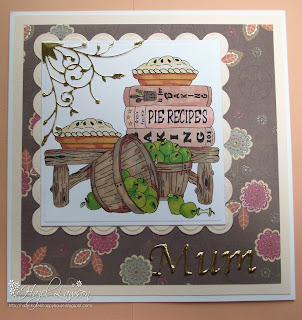 The theme this week at One Stitch at a Time is 'For a Mum/Mom'. I had a Stitchy image to play with this week and it's called Apple Pie. You can buy it over at StitchyBear Digi Outlet.

I used a large square card blank by Joanna Sheen. The backing paper is from a Desert Blooms pad by First Edition. I matted it on to pale peach Papermill card. I coloured the image with my Promarkers and added some shine with Sakura stardust pen to the apples and to make a smattering of sugar on the pies. I cut it with a Spellbinders grand nestie square and backed it with the scalloped nestie in the pale peach card. My new Memory Box die - Madera Corner - came out for first use. I cut it with gold Mirri board and set it at the top left of the image. I think it sets off the image beautifully. The last thing to do was to add 'Mum' in gold using my Spellbinders Romance alphabet dies. This was set at the bottom right corner.

The sponsor this week is Stitchybear with $9 to spend in the store. Check the challenge blog for full details.

Latest in my Life


Still no viewers but the initial contract with the estate agent was up last Thursday. I have put it in the hands of another estate agent, closer to home and on the local High Street. With a bit of luck he might manage to get me some viewers.  My son and daughter in law have had a viewer who is very interested in their house but she needs to sell her house before putting an offer in. That suits us fine because we can't do anything until I sell my bigger house.

My car was due an MOT last weekend and my son was due to organise this for me. He and my daughter in law both work shifts so I didn't want to push them to get it done. Unknown to me he had phoned number one son in Kent to say that it wasn't worth getting it MOT'd because it would need lots of work done to it. Number one son and daughter in law came up to visit on Friday and told me they were going home on Sunday - a long way to come for two nights! Then they told me that we were going out to look at cars because they were going to buy me another. That was the reason for their short visit and was I pleased!

The four of us went out on Saturday to view cars and number two daughter in law went for a ride on her bike instead. We eventually ended up buying a Nissan Note - well, number one son and daughter in law ended up buying me a Nissan Note. It's two years old but like brand new to me because my other was about twelve years old! We can collect it on Tuesday and it will be taxed for a year, fully serviced and valeted. I can hardly wait but I'm going to have a few practice runs in it before I go very far. I only started driving again when Eric was ill so I hadn't driven for about twenty odd years before that and was quite rusty.

I'm one lucky lady in many respects and Eric will be looking down and smiling. Many, many thanks are due to my lovely family, all four of them.

Some close friends of mine have just sold their house and are heading back to Australia. We met when their son started school with my number one son and we've been friends ever since. They emigrated to Australia when the boys were about ten and then they came back about ten or twelve years later, went back for a couple of years then came home again. They lived in Shropshire for quite a while before heading back to their home turf. They've been here for four years but have decided to take one last adventure and head back to live close to their daughter and family. We used to meet up every month for lunch so I'm going to miss them. They've been a real support to me over the past few months. When they get settled I'll have to think about going out there to visit. I'll not have to leave it too late because we're all getting a bit long in the tooth.

Thanks for calling by and thanks for all your comments. 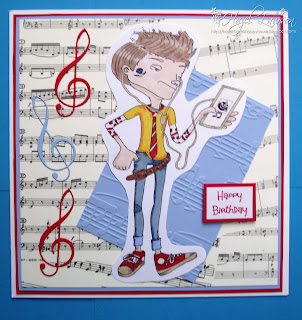 Use a Digi is the theme for the challenge this week over at One Stitch at a Time. It was my turn to pick the image for my team mate Josephine and myself and I chose 'Oh, Boy' by Priyanka over at Stitchybear Digital Stamp Store.

I coloured the image with Promarkers and then after trying various Spellbinder nesties I decided that they weren't going to work for the size of the boy I'd printed. I cut him out by hand, leaving a small border round him. My card blank is a large square by Joanna Sheen. The red card is by Papermill. The blue card and the music patterned card are both by Payper Box. After making the mat I used the remainder of the blue card to emboss a music panel. I'm not 100% sure of this now but it's stuck so it will have to stay! I used a Memory Box die to cut the staves and then generated Happy Birthday on the computer. I cut it by hand and backed it on to red card.

The sponsor this week is Stitchybear and one lucky person is going to win all the images used by the DT on challenge 158. Check out the challenge blog for full details. 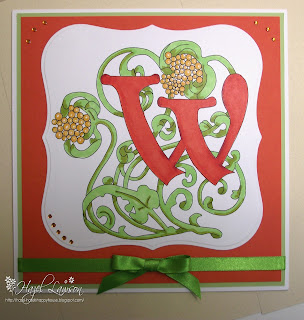 The theme for this week's challenge at One Stitch at a Time is 'Bright'. My designer this week was Jess and I chose the image 'Floral Cap Nouveau W' and it's available to buy at Stitchybear Digital Stamp Store. You can buy other letters but my daughter in law is Wendy and as she is very artistic I thought she would appreciate this image on her birthday card this year. The 'bright' theme also helped because her favourite colour is orange and that's pretty bright!! My favourite colour is green so that had to be in there too.

My card blank is by Joanna Sheen. I used Papermill green card and Papermill orange card as the mat for the image. I coloured the image with my Promarkers and then cut it with a Spellbinders grand nestie. The beautiful image didn't really need much in the way of embellishments so I only added some flat 'gem' stickers to the corners - they are from JJD Cards. I also added a green ribbon to the bottom and that's from the local market. Job done and it's all ready for Wendy's birthday in July!

The sponsor for this week's challenge is Stitchybear. Please check the challenge blog for prize details. 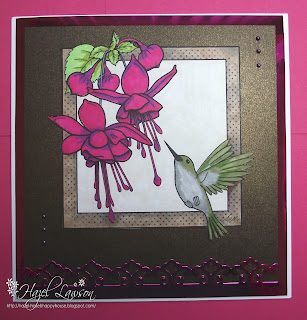 The theme this week at One Stitch at a Time is Anything Goes. It was Josephine's turn to pick an image for the two of us to use and she chose the Fuchsia and Hummingbird image by Teri over at Stitchybear Digital Stamp Store. Isn't it beautiful? I decided to go with the cerise/lilac fuchsia but there are many more colours that you could use.

I coloured the image with my Promarkers and then carefully cut round the outside edge. I matted it on to some bronze pearlescent card by Papermill which, in turn, was matted on to cerise Mirri board. The card blank is a large 8x8 square by Joanna Sheen. I used my Spellbinders Paris motif fancy border and added it to the bottom edge. The only thing to add then were the three pink pearls at the top right and three lilac pearls at the bottom left. The pearls are from Wild Orchid Crafts.

The sponsor this week is Stitchybear and check out the challenge blog for full details. Someone will win all the digis used by the DT on challenge 156!!!


I know that I said that I would start 'talking' to you all so that it would occupy me and keep you up to date with my life but I've been down over the past few days. It just hits me and I try so hard to dig myself out of it but I just have to wait for it to abate until the next time. This has been the worst time of my life and I think of Eric all the time. He wouldn't want me to be miserable and would be glad that I'm talking to you all. Today I drove to the local M&S and bought myself some flowers - I really went for some potatoes but decided to get some flowers to brighten up the sitting room. This is in the hope that I might just get a phone call to say that someone wants to view the house!!

I've had no viewers yet and the house has been up for sale since the end of January. I didn't expect anyone when we had all the snow but this past week hasn't been too bad at all, although bitterly cold, so I did expect at least one phone call. You obviously have uncrossed your fingers and you all promised that you would keep them crossed until I got some viewers. :)

This afternoon the sun is shining so let's hope that someone decides to come out over the weekend. My son, daughter in law and I viewed a house that was a in a bad state of repair and if I could sell mine we would put an offer in for it. Unfortunately by the time I sell this it might have already gone but I'm sure there'll be another one somewhere waiting for us. When I say it's in a bad state of repair I mean that NO-ONE could live in it at the minute!!  If by any remote chance I manage to sell this and we get an offer accepted I would have to go stay with my other son and daughter in law in Kent until we could get it in to a state where I could move in. I could 'take a holiday' while they oversee the renovations - that's the good thing of getting older your children begin to take over the 'looking after'.

This is just to let you all know what's happening in my life - not a lot unfortunately, but things can only get better. Thank you all for listening and thanks for visiting.