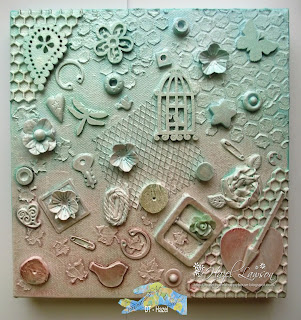 The theme this time is 'Recycling' over at the International Art and Soul blog so come and join us. This time I decided to do a mixed media piece. I've called it 'Wings of Love'. The canvas, from Hobbycraft, and paints, Luminarte mists, were new but most of the other items were recycled. I'll try to tell you about them all. lol I used texture paste and stencils on the background first of all and then added a couple of small pieces of Snipart honeycomb on two corners. The flowers were removed from a card that I'd made a mess of earlier and I'd saved the flowers - too nice to destroy. There's a small key, obviously I'd lost the lock I suspect, some tiny safety pins, some little foam circles that I've had for years and I'm still not sure what they were meant to be. A buckle that I've had in my sewing box for ages and I removed the green material from it to use just the metal inner. A piece of net from a fruit bag in the centre background. There's a piece of string coiled up and some engineering pieces that my DIL gave me - I have no idea what they are but they were in the rubbish bin where she worked so she saved them for me. lol My family always has eyes for odd items for me. There's a press stud and a washer and the arrow in the corner is cut off a large plastic one that was holding a message n a bouquet of flowers I received. The birdcage was new because I'd run out of other things to add. The dragonfly and butterfly were from damaged cards.

Sorry, I won't bore you any more. 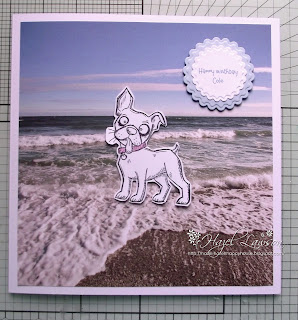 This week over at Moving Along with the Times we have the theme of 'For a Man'. I'm not sure that mine is the usual type of card you would send to a man but it was sent to a friend's son who is as tall as a man but not quite in that category yet! It was from Lily and me because Cole loves my dog.

My 8x8 card blank is by Joanna Sheen. The backing paper is from Joanna Sheen's Paper Collection Volume 2. I used a Tim Holtz crazy dog stamp and then cut her out leaving a small white border. I only coloured her pink collar with a Promarker and then raised her on sticky pads so that she was paddling in the sea. I generated the sentiment on the computer, cut it with a Spellbinders scalloped die and backed it with a larger blue scalloped die. It's already been given to Cole and it was a great hit. 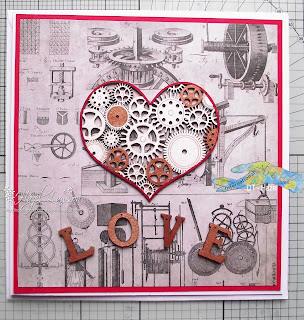 I'm so pleased to be working with a group of crafters that I worked with a few years ago on another design team. We've all come together again to be part of this new challenge blog 'International Art and Soul'.

The theme for our first challenge is 'Love is in the Air' so please come along and join us.

My card is an 8x8 by Joanna Sheen. The backing paper is by Tim Holtz and I matted it on to bright red card by Papermill. The steampunk Snipart heart (try saying that fast! lol) is distributed by Craft Box. I coloured the edge of the heart with a red Promarker and then used Crawford and Black's bronze acrylic paint on some of the cogs. The wooden letters I bought at Hobbycraft a few months ago and this is the first time I've used any of them. I painted them with the bronze paint too. Job done and I'm quite pleased with my almost steampunk card.

I'm entering my card into the following challenges:
4 Crafty Chicks - Anniversary
Cardz4galz - Love is in the Air
Craftrocket Challenge - It's a Love Thing
Crafty Creations Challenge - Anything Goes
Through the Craft room Door - Anything Goes