INTAAS to include an animal 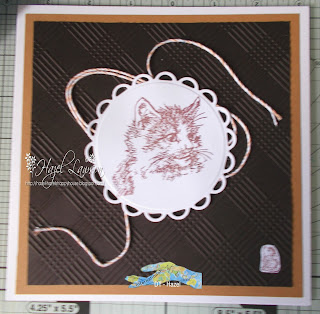 This challenge over at International Art and Soul is to 'include an animal' so come along and join us.

My card is a 7x7 by Craft UK. I used a sheet of dark brown card, by Papermill, and embossed it with an embossalicious folder by Crafter's Companion. I matted this on to some beige coloured foundation card by Sue Wilson. The image of the cat, by Barbara Gray, was stamped in Memento ink in cocoa. I cut it with a Spellbinder die. Before adding it to the centre of the card I used a length of baker's twine to lie under the cat as if it had been playing with it. I also stamped a very small image of a House Mouse before adding it to the bottom right corner.

Thank you all for visiting.
Posted by Hazel at 12:00 9 comments:

INTAAS - Inspired by a Book 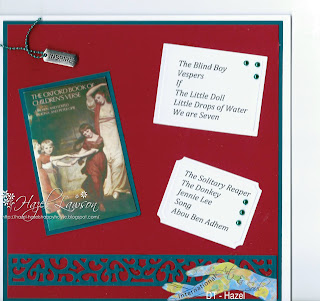 Come and join us at International Art and Soul in our challenge theme of 'Inspired by a Book'.

I did wonder if the card was to be inspired by a book or whether it was me who had been inspired by a book. I chose to make a card that shows a book that always inspires me. lol I love poetry and have quite a few poetry books but I go back time and time again to this one. The list on the top right of the photo shows some of the poems that are in this book. The lower list shows poems that I have loved and recited for many years. Jennie Lee is a poem that my mother taught me when I was very young. I've never met anyone else who knows it, apart from my cousins who were taught it by their father, my mother's brother. It was written during the reign of Queen Victoria but we have no idea who wrote it and I've not been able to trace it in any book. If I have trouble getting to sleep at night instead of counting sheep I recite the poems in the lower list plus Vespers. By the time I'm on to the fifth or sixth poem I'm asleep. I'd better stop waffling and get on to the details of my card.

It's a 7x7 card by Craft UK. The red card is by Papermill and the teal foundation card is by Sue Wilson. After mounting the red on to the teal I cut out a die in the teal, I think the die may be a Sue Wilson die but I'm not 100% sure. The fancy border was added to the lower section of the mat. I photographed my book and then shrunk it down to a suitable size before fixing to a teal mat. I typed the list of poems and then cut them with two Spellbinder dies before setting at an angle to the right of the photo. I added Mei Flower turquoise pearls to each list. The final touch was an Inspire charm by Craft Box that was set to the top left, tied with a little string of turquoise beads, also by Craft Box.

I'm entering my card into the following challenges: 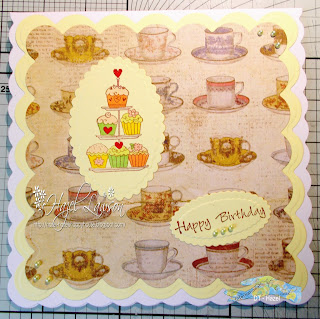 This challenge theme over at International Art and Soul was set by me and is 'A Tea Party'.  Come along and join us at our tea party.

My card is a large 7x7 scalloped card by Craft UK. I used a sheet of paper from a freebie pack in a Cardmaking and Papercraft magazine and cut it using a Spellbinder scalloped die. I used another larger scalloped die, again by Spellbinder, to cut a sheet of pale lemon card from Papermill. I matted the  teacup paper on to the lemon card. The image of the cake stand was a stamp, again a freebie. I've had this sheet of stamps for years, given free in a magazine years ago. I stamped it in Memento ink in cocoa and then coloured with my Promarkers before cutting with a scalloped oval Spellbinder die. I set it to the upper left and then using another of the freebie stamps I stamped the Happy Birthday sentiment. This was cut with another oval scalloped Spellbinder die before being set at a slight angle to the lower right. I added three small lemon pearls by Mei Flower under the words.

I'm entering my card into the following challenges:

Thank you all for popping by, hope to see you again soon.
Posted by Hazel at 12:00 8 comments: