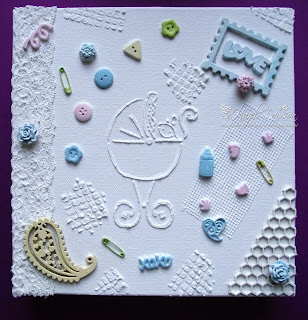 This week the theme is New Baby and I decided to do a mixed media canvas as a change to my usual cards. I hope you like it. The theme was set by Beckie over at Moving Along with the Times so come along and join us.

I used a box canvas by Hobbycraft and then started to embellish. The main focal point was to the be the baby in the pram so I used my Lasting Impressions stencil with some Dreamweaver embossing paste. I added a piece of Snip Art to the bottom right corner as a starting point. I placed a strip of lace down the left side and this was from the local market. A wooden scroll was added to the bottom left, this and the Snip Art were both from Craft Box. A small piece of net was used to the right as a base for small baby items such as the bottle, hands and feet. A small wooden heart and a safety pin completed that piece. A small wooden frame, also from Craft Box, was added to the top right and inside I added the word Love which is a small wooden 'button' I've had for ages. Once I was in the button boxes I found some baby buttons which I thought I would add, along with a hugs and kisses button and another little curly scroll which went top left. The flowers were from Craft Box and I dotted them around before deciding the piece needed more texture so I dug out my Tim Holtz burlap stencil and embossed snatches of it in various spots. After adding another couple of safety pins I painted it all with white gesso from Daler Rowney and when that dried I picked out certain items to be blue, pink, yellow and green. After that was completely dry I coated it in Winsor and Newton clear gesso to seal it.