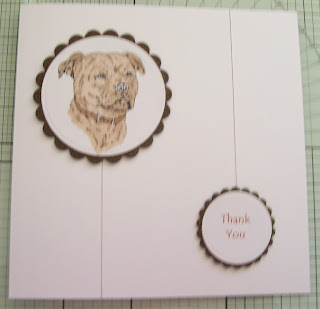 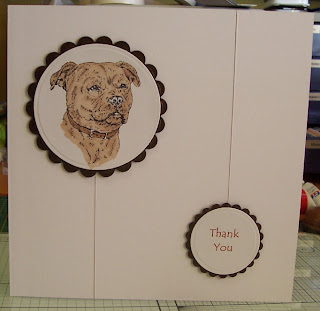 My son and DIL breed Staffordshire Bull Terriers and they have had two litters in the last couple of weeks - ten in one litter and five in the other. Buffy had ten and five of her pups have died, they just stopped feeding so it was probably just nature playing its part. Anyway, they asked me to make a thank you card for their vet and it fits the bill perfectly for this Less is More Challenge. It's a large square Crafts UK white card. The Joanna Sheen Staffie stamp was stamped in Memento black ink and coloured with Promarkers. It was cut with a Spellbinders circle nestie and backed with a Papermill brown cardstock in a scalloped nestie. The sentiment was generated on the computer and set on nesties to match. I embossed a line down to the sentiment and up to the dog and then inked the embossed line with a Whispers pen. I've added both photos because the first looks a little blurred to me. I might have to brush up on my photography skills!!
Posted by Hazel at 13:55