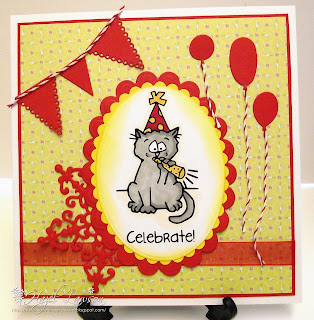 I made this card yesterday but I've just managed to get the photo taken this morning. I've used a Craft UK card blank again - gone are the days when I used to score and make my own! It's an 8x 8 square and the backing paper is from a First Editions pad called Hideaway. The red card is from Papermill. The image is another that I won from Sweet 'n' Sassy and the face on this cat is priceless! I coloured it with Promarkers and after cutting with my Spellbinders oval nestie I used Distress Ink in Mustard Seed round the edges. I matted it on to the scalloped nestie in yellow card frorm Papermill and then matted that on to another grand oval nestie in red. I tucked an Ironworks motif under the image and a strip of Joanna Sheen's red organza ribbon is across the bottom. I then went the whole hog and cut some Whimsy bunting and Cuttlebug balloons. I used Creative Expressions baker's twine for the strings on balloons and bunting.

I'm entering this card in to the following challenges:
Crafty Sentiments - For a Child
Ladybug Crafts Ink  -Birthdays
Simon Says - Anything Goes
Posted by Hazel at 11:04